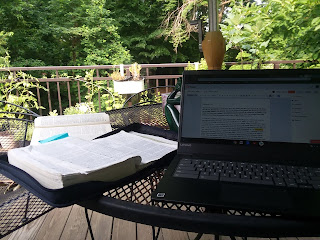 "All of us who are mature should take such a view of things. And if on some point you think differently, that too God will make clear to you. Only let us live up to what we have already attained." (3:15-16) In the previous verses Paul was encouraging the Philippians and us to, "Forgetting what is behind and straining toward what is ahead, I press on toward the goal to win the prize, for which God has called me heavenward in Christ Jesus." (3:13-14) There are some who are on board with Paul, they agree and accept his words, and some who are not, but Paul is confident that, 'God will make it clear to you.' I love that Paul isn't worried. I find I get anxious the moment I realize that those I am closest to do not agree with me Biblically. I'll restate my thoughts trying to make things clearer. I'll argue until I've made my point clear and hopefully won them over. It's so hard for me, when I see the freedom in Christ and someone else does not. I can't let it go easily. But Paul was confident that the Lord will reveal His wisdom and freedom to the people and was able to let it go. He was at peace knowing that they all would get it.

"Join with others in following my example, brothers, and take note of those who live according to the pattern we gave you. For, as I have often told you before and now say again even with tears, many live as enemies of the cross of Christ. Their destiny is destruction, their god is their stomach, and their glory is in their shame. Their mind is on earthly things. But our citizenship is in heaven. And we eagerly await a Savior from there, the Lord Jesus Christ, who, by the power that enables him to bring everything under his control, will transform our lowly bodies so that they will be like his glorious body." Paul calls us to follow his example of following Christ- a life of serving others. First of all, I wish I could say to anyone, even my children, "follow my example." That is an amazing statement to make. I am not living a life that I would want anyone to follow! I'm trying, but not walking in a way that others should follow =(  One day, I hope! So, Paul is really a changed man and following Christ as He should. Lord, make me a leader.

"...many live as enemies of the cross of Christ. Their destiny is destruction, their god is their stomach, and their glory is in their shame. Their mind is on earthly things." I know this statement is true. My own family members live their lives as enemies of the cross of Christ. Last year my mentally disabled brother was diagnosed with cancer. My parents and sisters chose to let him die rather than heeding the doctors advice of proton therapy and life for five more years or even more. My other brother and I fought and fought them, but they would not listen. Their, 'mind was on earthly things.' They didn't want to deal with my brothers fears of radiation, his sickness, his weakness. They only thought and only cared about themselves. Their selfishness was unbearable to watch. They wanted his death and so within one year he died. My family has lived a life of selfishness and destruction, but they are not the only ones. I feel like every few years I bump into a 'Christian' who claims they love the Lord and yet their love of money, and success, or even fame, over take their walk and lead others to destruction. I can see why many Christians walk away from the church. You think you are safe until you meet someone like who Paul describes. But Paul doesn't leave us with this thought, he goes on to say, "But our citizenship is in heaven. And we eagerly await a Savior from there, the Lord Jesus Christ, who, by the power that enables him to bring everything under his control, will transform our lowly bodies so that they will be like his glorious body." (3:20-21) Even though there are, what I call 'crazy Christians' out there, stay focused on the truth of Christ who 'brings everything under his control.' Be at peace, God is in control.

Today's Prayer:
Father, I desire to be a mature Christian. I desire to be your servant with a pure servant's heart. I desire to say, 'follow me as I follow Christ.' Make me more like you. Lord, too many times I have feared those who are 'enemies of the cross.' Help me to forgive them and trust that you are in control. Help me to follow you all the days of my life no matter what evil comes across my path. I love you with all my heart. In Jesus' name, Amen.
Posted by Ellen Gill at 7:18 AM

I am just a girl who is walking down this path of life with Jesus and pausing in amazement at all He has done and continues to do in my life. My heart's desire is to share the stories of my life that Jesus has touched so that they may encourage you, convict you, prod you toward being ever closer with Him.

My Most Popular Posts

Do you know Jesus?

The Bible says, "Ask and it will be given to you; seek and you will find, knock and the door will be opened to you. For anyone who asks receives; he who seeks finds; and to him who knocks, the door will be opened." (Matthew 7:7-8) So, ask Him and seek Him and you will find Him- If you have any questions please feel free to write me. As you read my blog you will see how Jesus has changed my life-He will change yours too.